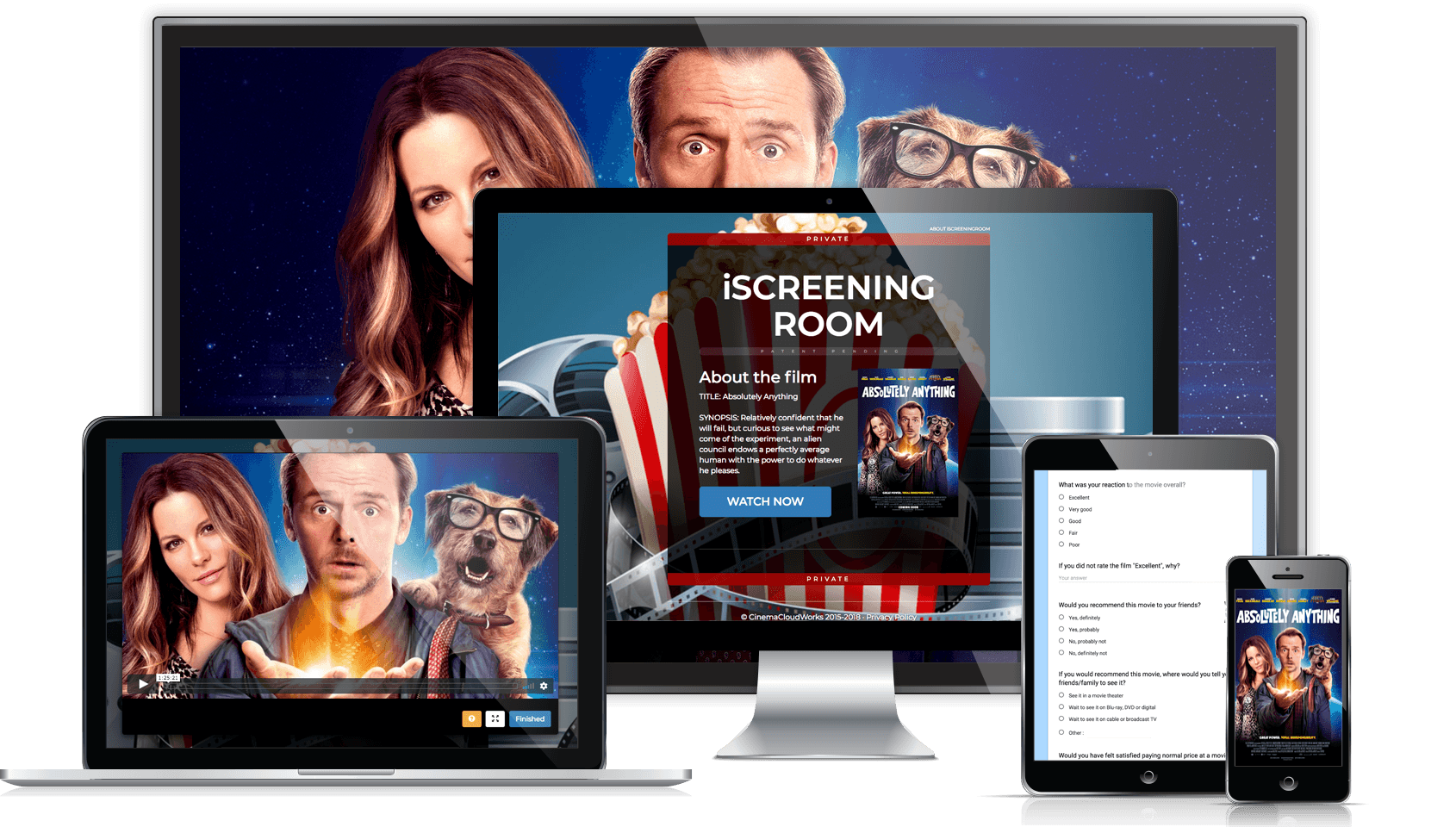 "iScreeningRoom gave us the ability to simultaneously test our film in multiple regions that would have otherwise been cost prohibitive with traditional live screening. We couldn't be happier with the results." - Gareth West, Ketchup Entertainment

PEOPLE WHO TRUST US

iScreeningRoom conducts secure online movie test screening for feature films, trailers, music videos, television shows, commercials, and more. iScreeningRoom test screenings focus primarily on accurately identifying the “who” and “where” of your target audience while also uncovering any potential weaknesses in your production.

Test movies online securely. Whether you're a major studio looking to test an upcoming wide release, or an independent filmmaker in search of critical feedback, iScreeningRoom's online movie testing is your most reliable source of objective opinion, deep-dive analysis, release plan development, and much more. 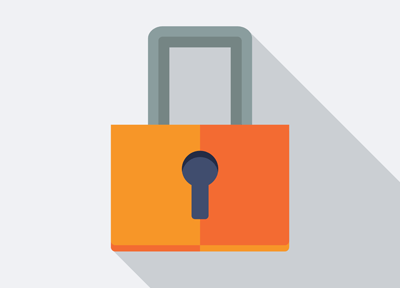 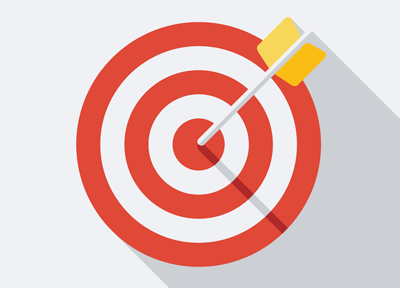 Why do an in-theater test, hosted in a single location, in a single market, on a single night, with a paid recruited audience and immutable demographic, when you can test all markets and all demographics at the same time using an audience of genuinely interested participants?

Whether you’re in the editing room looking for some objective feedback, or you’re planning your theatrical release and looking to understand how your film may perform under real word circumstances, iScreeningRoom delivers accurate actionable results. 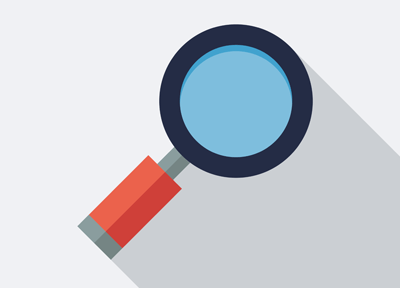 With beautifully crafted easy-to-read charts and graphs at the forefront, iScreeningRoom unambiguously answers your most critical questions with clarity and certainty.


Won’t not seeing the film in a theater negatively impact the results?

iScreeningRoom's movie testing employs an interest-based recruitment process where the solicited audience is made up of people who have self-identified as being interested in your film’s genre(s) (e.g. drama, action, etc.) or like-films (comps) regardless of their gender, age, or ethnicity.

iScreeningRoom solicits its national pool of potential audience members, who match your film's profile, by presenting them the film’s title, synopsis, genre, MPAA rating, and key art (if available). These potential audience members, from all over the United States, then have the option to “Watch Now” and take a survey, or to optionally fill out a “Not interested” form and provide a reason for their not wanting to watch the film.

The weakness with In-theater testing, is two fold... iScreeningRoom’s superior interest-based recruitment and testing methodology results in painting a picture reflective of how the film will actually perform in the real world while also identifying with great clarity a film’s target audience.

In the end, iScreeningRoom test results can then be fed into CinemaCloudWorks to build a theatrical release plan that maximizes box office potential by identifying those theaters most likely to experience success.

What security features does iScreeningRoom employ to protect my film?

How quickly can I get a project set up on iScreeningRoom?

Your movie test screening can be setup in as little as 24 hours.

What questions can I ask audience members?

Almost whatever you want. Along with a set of about 40-50 industry standard questions, post-screening surveys can be customized to meet your specifications. iScreeningRoom can also provide a pre-screening survey to engage with audience members prior to watching the film to measure response to your marketing materials (e.g. posters, messaging, title, etc.).

What information will I get after using iScreeningRoom?

How do I get started?


How do I sign up to watch free films before they’re released in theaters?

First, you need to live in the USA and have a valid email address and a working cellular telephone number that can receive a text message. All participants must also accept iScreeningRoom’s terms of Confidentiality and Non-Disclosure Agreement, and are required to fill out the post-screening survey after watching each film.

NOTE: iScreeningRoom keeps track of participant’s progress when watching a film. Anyone attempting to pirate, duplicate, or otherwise circumvent any of iScreeningRoom’s anti-piracy systems will be immediately banned.

Absolutely. Filmmakers are hungry for audience feedback and need to hear your opinion before releasing their works to the masses.

What devices does iScreeningRoom support?

Depending on the film being screened, iScreeningRoom can support all modern devices including desktop computers, laptops, tablets, and smartphones.

Can I stream to my television?

Yes! If you have an Apple TV, Chromecast, or Roku, you can stream iScreeningRoom broadcasts right from your device to your living room.

I signed up for iScreeningRoom - when do I get to start watching films?

Screenings typically have a limited viewing window of a couple of days. As filmmakers are given an opportunity to target specific regions and demographic, you will be invited whenever you fall into a filmmaker’s target audience.

NOTE: Please make sure to add iScreeningRoom.com to your safe senders list in your email program to prevent invitations from ending up in your spam folder.

Why do you need my phone number?

Film distributors want to know their films are safe with us and with you. To oblige, whenever you watch a film on iScreeningRoom.com, we watermark the film with your cellular phone number and email address.

Because email alone is simply too easy for the bad guys to spoof, cell phone numbers are used to provide a much greater level of identification and subsequent protection against piracy.

This type of watermarking provides you with a way of saying to the distributor, "You can trust me." while providing the distributor a means of tracking down the bad guys in case any unauthorized copy of the film makes its way into the mainstream.

Rest assured we will never send you unsolicited text messages nor will we ever sell your information to any 3rd party.

Unfortunately, if you do not currently have a cell phone, you will be unable to participate in the screening. We will however be making other means of validation available soon, so please stay tuned.

How long do iScreeningRoom surveys take to complete?

What do you do with the information I provide?

All of the information you provide is shared only with the filmmakers we work with. You will have the option to share (or not) your personally identifiable information with those filmmakers. Your information will not be sold to 3rd party advertisers.

NOTE: In some instances, a filmmaker may want to reach out to you with specific follow-up questions via email. If you would like to be included in these follow-up focus groups, you will need to check the "Include me in focus groups" check box.

What happens if I don’t fill out a survey?

Your opinion is very important and your seat in the iScreeningRoom is valuable. Unfortunately, if you watch a film and fail to fill out a survey, you will no longer be invited to future screenings.

All questions aggregated into four quadrants with iScreeningRoom’s Quadrant Report...

All data collected is delivered in a spreadsheet with comments broken out into separate tabs for convenience...